Vasoproliferative tumor of the retina (VPT) correspond to fibro-vascular proliferations of the peripheral retina. They present in the form of one or more masses consisting of multiple capillary abnormalities (“telangiectasia”) surrounded by a benign proliferation of retinal glial cells. The vascular and glial components can vary from one lesion to another, which explains the initial confusion in the identification of the lesions and the multiplicity of names found particularly in the English-language literature e.g. ”retinal angiomas in the aged”, “angioma-like lesion”, “angioma-like mass”, “neovascular fundus abnormalities”, “presumed acquired retinal hemangiomas”, “retinal angiomatous mass”, “peripheral uveal neovascularisation”, “hemangioma-like masses of the retina” and “aquired retinal angiomas”.

VPT may be congenital tumors when they are isolated. Secondary VPT, on the other hand, are acquired tumors.

VPT usually manifest themselves in the form of “floaters” in fields of vision, photophobia or a drop in visual acuity. An examination of the fundus often allows the condition to be diagnosed. Most VPT are isolated, single and unilateral. They resemble small pinkish tumors located at the outermost retinal periphery, usually in the inferior temporal region. Hyperplasia of the pigmentary epithelium (increase in the corresponding cells) is often found on the edge of the lesion. VPT cause severe retinal exudation and this leads to a build-up of sub-retinal fluid. Serous retinal detachments are responsible for a drop in visual acuity when they reach the macula. Exudation from abnormal vessels is also apparent from the presence of dry lipid exudates and, in some cases, by macular edema. 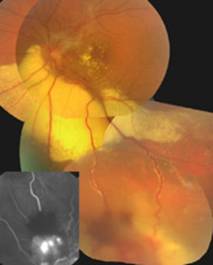 On this figure, the lesion is red and projecting, corresponding to VPT (a). Exudative retinal detachment secondary to the VPT reaches the macula and causes a loss of visual acuity (b). Note the accumulation of dry lipid exudates in the inferior nasal of the papilla and in the posterior pole (c). Vascular abnormalities are revealed by fluorescein angiography. In 1 in 4 cases, VPT are said to be “secondary” because they occur during chronic retinal disease. In most cases, it is an intermediate uveitis or retinitis pigmentosa.

Fluorescein angiography can be difficult to evaluate because of the extremely peripheral position of the tumor. The lesion is filled in the early stages of the angiography, revealing a network of dilated capillaries. The dye then spreads out from the lesion. Serous retinal detachments fill gradually, in the later stages of the investigation.

Optical coherence tomography (OCT) is used in particular to quantify the edema and serous detachments in the macula.

The development of VPT depends mainly on the effect on the retina and, more importantly, the macula as a result of the exudates associated with the vascular abnormalities of the lesions. A drop in visual acuity, for example, is observed when the lesion affects the macula, causes serous retinal detachment or leads to cystoid macular edema. Very active lesions can become more complicated with retinal detachment by “traction”. The course can also be complicated by the occurrence of more or less dense hemorrhages within the vitreous.

Treatment is based on the need to counteract the exudate produced by the abnormal vessels in the lesion. Laser photocoagulation of the vascular abnormalities often leads to regression of serous retinal detachments (Cf. Figure 2). 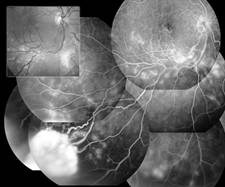 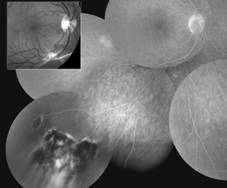 The above Figure illustrates the appearance of the retina before and after laser photocoagulation in a case of VPT observed during fluorescein angiography. Before treatment, the lesion is white and all the vascular abnormalities that make up the VPT quickly fill with dye. The spread of dye into the associated serous retinal detachment is also evident. After treatment, the lesion is black and almost all the vascular abnormalities have been destroyed by laser photocoagulation. The serous retinal detachment has disappeared.

Other therapeutic options such as cryotherapy and radiotherapy are sometimes used. Dense, persistent hemorrhages in the vitreous and retinal detachments may require surgical treatment.

Search
the site of CERVCO